Hunger for action takes you far

The passion to have an impact has taken Sami Lundgren from a paper mill employee to UPM's Vice President in charge of responsibility. The growth to a leadership role has been possible using the same recipe as in any other work: roll up your sleeves and get going.

VP, Responsibility Sami Lundgren, 52, leads a team of 13 sustainability experts and fosters sustainability in UPM globally. Lundgren came to work for UPM and the Voikkaa paper mill 35 years ago as a young lad going to vocational school.

"Later, when I was on the night shift, I had time to reflect and think of what I want to do during my career. I found a passion to have an impact, so I went back to school," Lundgren says.

He got through upper secondary school by taking evening courses alongside working three shifts. Textbooks could be read while the slitter rolled, as winding the roll could take as much as 15 minutes. He continued his studies at the University of Helsinki because he was interested in biology. He got his master's degree with the help of study leaves and scholarships from the Kymi Osakeyhtiö 100-year anniversary foundation. He also went on working at the mill in the summers.

"Colleagues and managers encouraged me, and people didn't find my textbooks strange in the control room. I doubt that the Voikkaa plant manager knew much about bottom-dwelling animals in waterways, but he gave permission to do my master's thesis for UPM," Lundgren says. 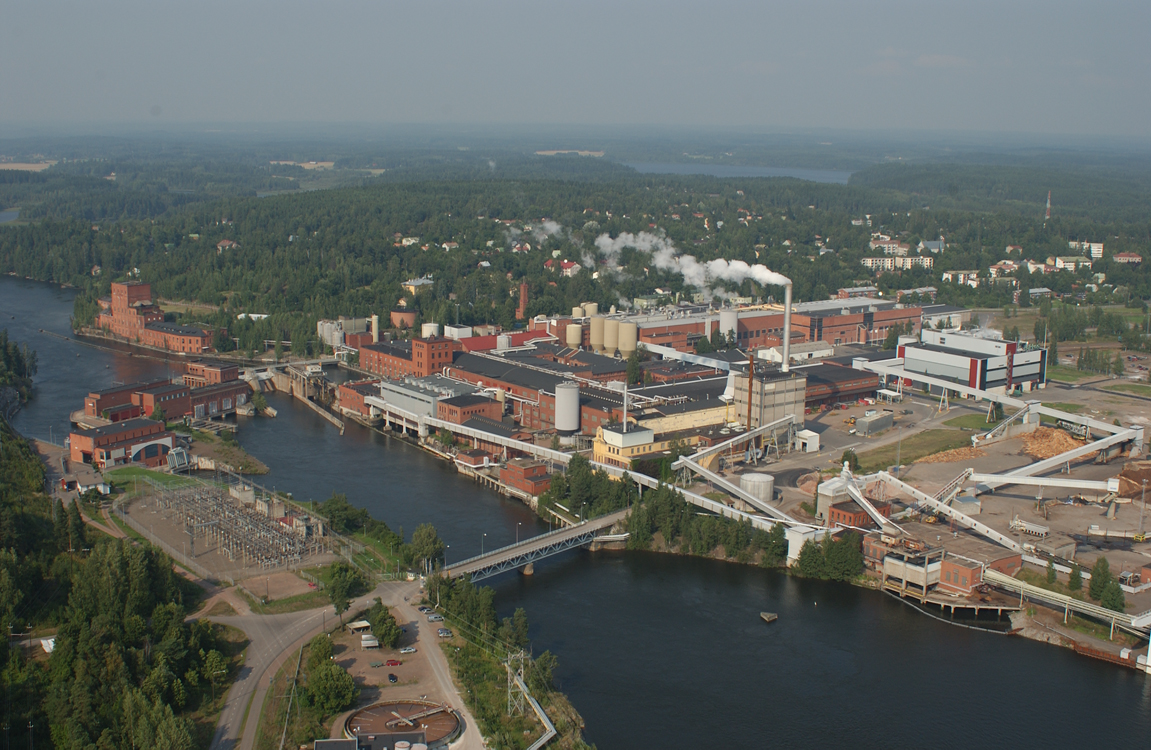 Voikkaa paper mill in the beginning of the 2000s.

School of hard knocks for the novice

At Voikkaa, Lundgren also had a crash course in leadership, as he became the manager of almost 50 laboratory technicians in his twenties. The team had both young and senior employees, each with their own different needs.

"School of hard knocks is efficient, and I learned everything possible. I tried to work hand in glove and believed that would make things alright. A real desire to take things forward can be seen and is infectious."

Lundgren got his master's and moved to Helsinki to join the paper business's environmental marketing which later became the Group's sustainability team.

"The role as an expert felt great. I felt that I've gotten ahead and my ability to bring together my factory background and theoretical studies was my strength."

Lundgren worked as an environmental analyst for about seven years, and then took the opportunity to be the sustainability team's manager as a maternity leave replacement. "My role among my colleagues changed, and it was a challenging situation."

Lundgren thinks that feedback from team members, colleagues, and managers have helped him a great deal in becoming a leader.

”All feedback is important as you can develop blind spots in your own ways of working. Leadership is finding the best practices together. This cannot take place without feedback and open dialogue."

As the sustainability team leader, he was encouraged to look at the big picture and not just focus on his own team. Coaching by his manager and accumulation of experience have helped him to grow into his role gradually.

"I remember one case that still makes me smile. I was asked if I thought that any Tom, Dick, or Harry would understand my message."

Lead as you would be led

Lundgren's guiding principle is "lead as you would be led." He still likes to keep his hand in, wants to foster openness and trust in the knowhow of his experts.

What one employee does is relevant as the choices have a cumulative effect through the 18,000 colleagues at UPM.

"Adjusting the slitter's blades may not sound very meaningful, but it helps us to produce prime quality at one go, and this improves our efficiency."

Essentially, Lundgren thinks he has acted in the same way in all his jobs – as a worker, expert, manager, and leader. You need to roll up your sleeves and get going to make things happen.

”If you want to evolve, the hunger for action will take you forward at UPM. The most important thing is to open your mouth and say what you think."

See more about responsibility at UPM