UPM and Yrityskylä teach kids the secrets of sustainable consumption

UPM was the first company to partner with the Economy and Youth TAT’s Yrityskylä (Business village) project to teach children societal skills. The model society helps mentor kids in the skills of sustainable consumption and working life – and helps them discover themselves.

Do you know what a sorter is?

When a sixth-grade student visits Yrityskylä, they must first put any “trash” they may have in a sorter, or a raw material sorting station instead of in a regular trash can. The word trash is in scare quotes simply because very little can still be classified as trash.

“We turn the entire way of thinking upside down here, so that nothing is trash, rather everything is a raw material. Language informs perspectives and that is why in Yrityskylä , we speak of raw materials instead of trash,” says Tiina Solas, Yrityskylä partnership manager.

­“Sorting stations have their own receptacles for cardboard, plastic, biowaste and so on. These containers also have a voice function, so that when you try to put something into the mixed waste, they will ask if you’re quite sure that it cannot be recycled,” she adds.

When raw materials find their way to the right sorting container, the talking receptacle thanks youngsters and tell them what it will be used for.

The first site was established in 2010 to allow children and adolescents to learn social skills in a new way. The village gathers sixth- and ninth-grade students in a functional miniature society. Everyone has a role as employees as well as members of society, just like in the adult world.

“The idea of working life might seem distant for a sixth-grader, but when they are involved in this kind of inspiring and practical activity, then the brands that the see in the surroundings become real actors in the children’s eyes,” she says.

The village’s operations are based on the national school curriculum and Solas adds that this year for example, about 80 percent of sixth-grade students in Finland will visit the Yrityskylä.

“The feedback has generally been very positive, for the children as well as the teachers.”

Children’s activities in the village are directed by a script drawn up by pedagogical experts on the basis of the school curriculum. As a result, participants learn about issues such as sustainable consumption and traditional working life.

Investing in the future

Sustainable development and education has clearly emerged as a major theme for educators with efforts underway to make it a crucial component of school curriculums. Apart from government efforts, the private sector is also doing its share to further promote the cause. For instance, forest industry company UPM, a forerunner in the circular economy and the production of renewable raw materials - has been involved in Yrityskylä since it was established 11 years ago.

“UPM was the very first business partner to get involved in Yrityskylä, so its role has been quite significant. UPM’s involvement has very likely inspired other companies to support the project,” explains Solas.

Such partnerships will become increasingly important in the years ahead, with the next generation having to sustainability and climate change challenges across their personal and professional lives. Equipping them to handle these situations can only benefit both businesses and the society at large.

Today’s sixth grade students are the future of UPM

Solas says that a summary of feedback suggests that 76 percent of respondents felt that after spending a day at Yrityskylä helped them better understand how their personal choices and actions could impact the sustainable use of natural resources. Half of sixth-grade respondents said that their time with the project helped them understand the concept of the circular economy.

“The companies are the ones that can provide information about working life and the industries in which they operate. Of course, although their economic contribution is important, we wouldn’t be able to provide the children with such diverse information without our partners,” Solas notes.

“UPM educates children about the potential of bioeconomy and how products are manufactured and sold. That is the kind of knowhow that we ourselves don’t have, but we can get it through our partnership with UPM.”

Over the course of the project, UPM has touched the lives of nearly 18,000 children at villages in the Helsinki-Vantaa, Pirkanmaa and Southeast Finland regions, and the feedback has been positive. In Helsinki-Vantaa UPM’s volunteers have also had an opportunity to be as helping hands for a day. All of them have considered the experience meaningful.

Eighty percent of children who have “worked” with UPM in the project said that they came away with useful insights for the future. Nearly the same proportion said that they had learned new things and identified new personal strengths and areas of interest.

Participants in the societal project also left with concrete benefits that they could apply in their everyday lives. According to an annual report produced by the Economy and Youth Yrityskylä project, 72 percent of secondary school aged children who took part in the project said they would apply for summer jobs. That is roughly 10 percentage points more than young people who did not participate the project.

Reading and volunteering broadens your horizons

Biofore Share and Care: We focus on projects that enhance reading skills and learning opportunities 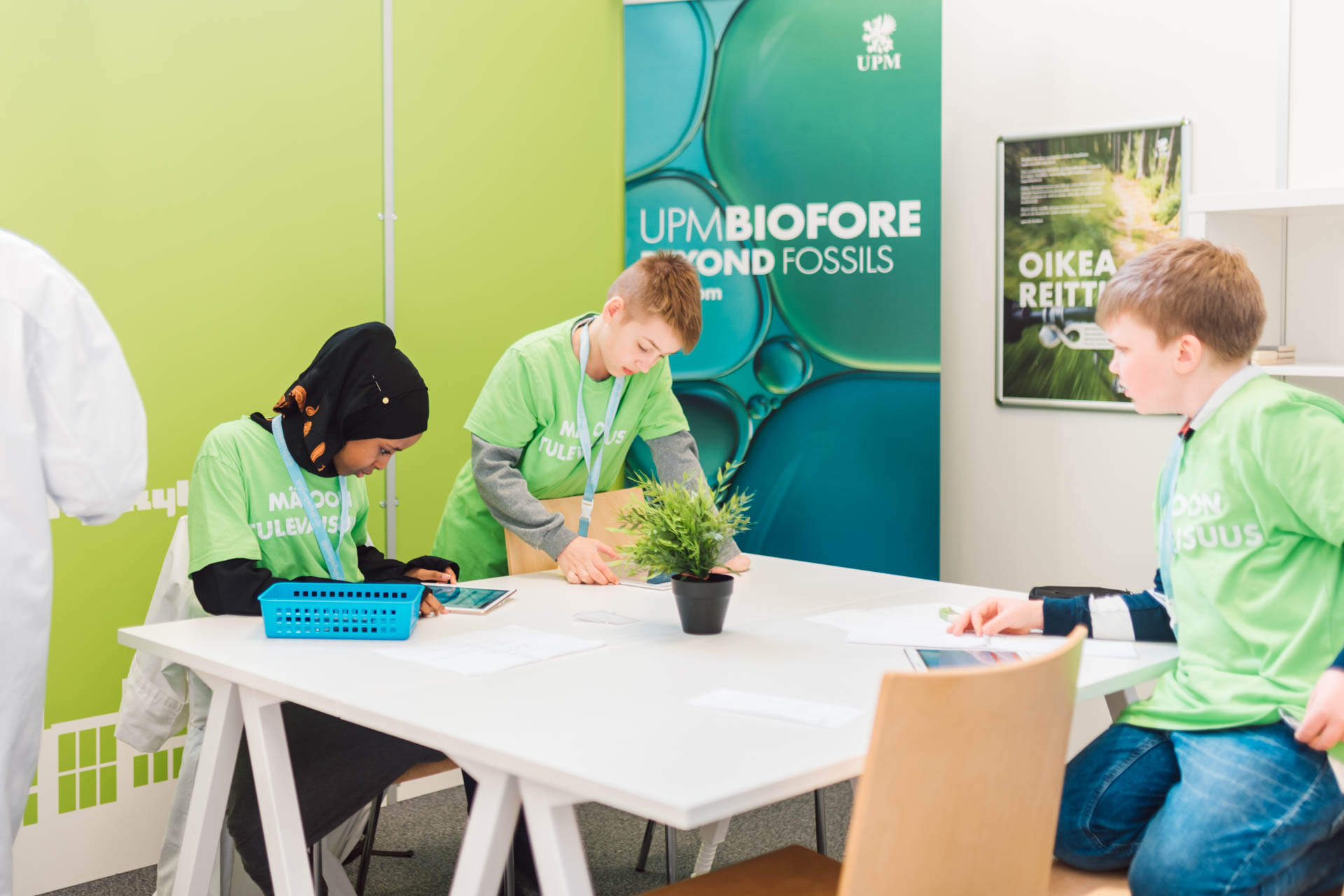