The laboratory tests of renewable UPM BioVerno diesel were conducted in the VTT Technical Research Centre (VTT) and field tests in Helsinki region bus traffic together with Helsinki Region Transport (HSL). The year-long bus field tests' measurements were done by VTT, and the tests were also supported by Transdev Finland Oy, Volvo and St1.

The first laboratory tests were done with Euro III Class buses, which are still widely used on Finnish roads even today. UPM BioVerno diesel produced clearly lower emissions than fossil diesel. Compared to other advanced fuels, the emissions of UPM BioVerno diesel were at least as low as theirs.

"The use of UPM BioVerno diesel in the current bus fleet instead of fossil diesel would lower emissions from public transport significantly. This is good news as this Finnish wood-based fuel could immediately - and positively - affect the air quality in the Helsinki region," says Sari Mannonen, Vice President of UPM Biofuels.

The field tests with buses were conducted by Transdev Finland on a regular bus route between the city of Kerava and Helsinki using four identical Volvo Euro VI Class buses that have low emissions and efficient engines. The test runs were done using 20%, 50% and 100% UPM BioVerno diesel and St1 was the fuel logistics provider in the tests. 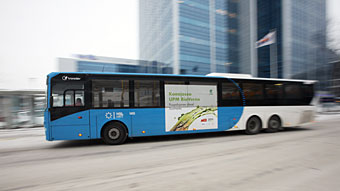 According to test results, UPM BioVerno diesel is working very well in all blending ratios - just like the best diesel fuels - and fuel consumption was exactly the same. Together the four buses travelled some 400,000 km without any fuel-related incidents.

The Euro VI Class buses are equipped with diesel particulate filters (DPF) and selective catalytic reduction (SCR) catalysts which are capable of reducing emissions to a negligible level, so the tests did not show any significant differences in emissions between various fuels. In Euro VI Class engines the fuel affects the emissions mainly indirectly: high quality fuel, such as UPM BioVerno, guarantees that the exhaust cleaning systems operate effectively even after driving significant mileage.

"We are happy with the test results - they show that UPM BioVerno could fully replace fossil diesel in current bus traffic. Biofuels have a significant role in our company's targets, as we are aiming for carbon-free public transportation in the Helsinki region," says Reijo Mäkinen, head of the Traffic Services department in HSL.

The bus field tests were part of a larger BioPilot project coordinated by VTT. The goal of the project was to encourage companies to commercialise renewable energy solutions in traffic.

"Advanced biofuels are a tested, well-functioning solution and a great opportunity for Finland. They could be our fast track to low emission traffic as they could be taken into use immediately and clearly cut down the emissions," says Research Professor Nils-Olof Nylund from VTT.

HSL and VTT have started the BioSata project, which is a natural continuum for the BioPilot project which has now ended. The new project is proceeding to application phase and its target is to raise the level of biofuels used in HSL bus traffic up to 70-90% before the end of this decade.

UPM's renewable diesel, known as UPM BioVerno, is an innovation that will reduce greenhouse gas emissions by up to 80% and tailpipe emissions significantly when compared with fossil fuels. This high quality biofuel is produced from a residue of the pulp industry, crude tall oil. UPM BioVerno is an ideal fuel for all diesel-powered vehicles.

UPM started the production of wood based renewable diesel in the UPM Lappeenranta Biorefinery in January 2015. The production capacity of the biorefinery is 120 million litres of renewable diesel annually. UPM BioVerno has been granted a Finnish Key Flag Symbol which can be granted to products that are manufactured in Finland and have a domestic origin degree of over 50%.

UPM BiofuelsUPM plans to become a major player in high quality, advanced biofuels for transport. Biofuels are an essential part of the Biofore strategy. The innovative wood-based biofuels developed by the company and their production technologies are part of a sustainable future. UPM's biofuels are frontrunners in quality, usability and sustainability. They will significantly decrease greenhouse gas emissions compared to fossil fuels. www.upmbiofuels.com

UPMThrough the renewing of the bio and forest industries, UPM is building a sustainable future across six business areas: UPM Biorefining, UPM Energy, UPM Raflatac, UPM Specialty Papers, UPM Paper ENA and UPM Plywood. Our products are made of renewable raw materials and are recyclable. We serve our customers worldwide. The group employs around 19,600 people and its annual sales are approximately EUR 10 billion. UPM shares are listed on NASDAQ OMX Helsinki. UPM - The Biofore Company - www.upm.com

VTT Technical Research Centre of Finland Ltd is the leading research and technology company in the Nordic countries. We use our research and knowledge to provide expert services for our domestic and international customers and partners, and for both private and public sectors. We use 4,000,000 hours of brainpower a year to develop new technological solutions.www.vttresearch.en

HSL (Helsinki Region Transport) is a joint local authority that plans and organises public transport in the region and works to improve its operating conditions. HSL procures bus, tram, metro, ferry and commuter train services. In addition, HSL is responsible for the preparation of the Helsinki Region Transport System Plan, approves the public transport fare and ticketing system and ticket prices, organises ticket sales, and is responsible for ticket inspections as well as public transport marketing and passenger information. www.hsl.fi