The inspiration and innovations behind UPM BioVerno

The story of UPM BioVerno started in 2006 when our company’s top management was mapping out new opportunities for the forest industry. It was seen that traditional forestry was going to face challenges, such as the halting of paper demand growth in Europe and North America. It was quickly seen that biofuels represented an interesting potential area for growth. The team consisted at this point of only a handful of people. In the beginning, the focus was on a project aiming to produce fuel by gasifying solid biomass.

Soon, however the direction shifted towards producing diesel out of crude tall oil, which is an abundant residue of pulp production.

The first trial rounds were conducted through external parties, but resulted only in jamming the reactors and producing candle-like wax. The team decided to start developing the production process on its own. The largest challenge was the crude tall oil purification as well as the hydrotreatment itself. This was in 2008, and at this point I joined the project.

Next the facilities for our own testing activities were built. We started using our first own reactors and laboratory analyses, and produced the first small batches of biofuel.

At first the minimum goal was to produce fuel oil for heating purposes. However, we quickly realized that the clear hydrocarbon produced from brown tall oil was too good to be used as heating oil. The extent of the success was a surprise even to the team itself. 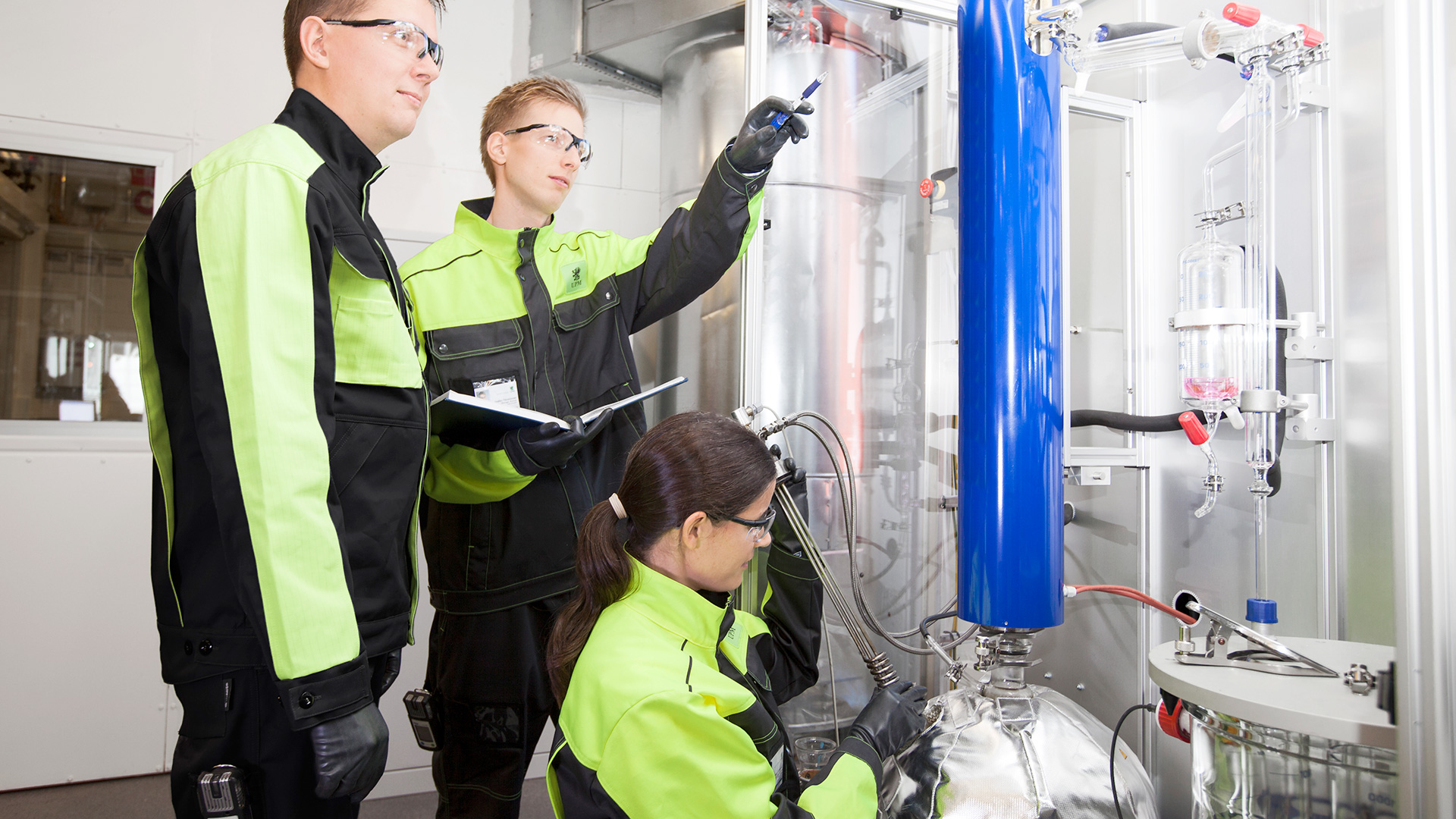 The years 2009 - 2010 were very interesting from an inventor’s perspective. A myriad of procedures were conducted and everything seemed to move forward extremely fast. One significant milestone was the successful purification and pretreatment of the crude tall oil. The process was iteratively improved by learning from mistakes. When the current concept was finally found, it produced very good test results from the very first test runs. Business model development and feedback from potential customers was very important and motivating at this development stage.

The process was finetuned and in 2012 an investment decision was made to build a commercial-scale biorefinery in Lappeenranta. Building started in the summer of the same year and in late 2014 the refinery was taken into use. This stage was time-consuming and at times frustrating: when one step was certified as functioning, another was found to need improvements. Work had to be done in careful stages to ensure that each unit functioned flawlessly. When in early 2015 the production of UPM BioVerno was started, we really were lost for words. It was so rewarding to see the long development process finally transform into a product, and to see that product loaded into a client’s tank truck. And most importantly, to see that the end-product reflected both our plans and the clients’ expectations. 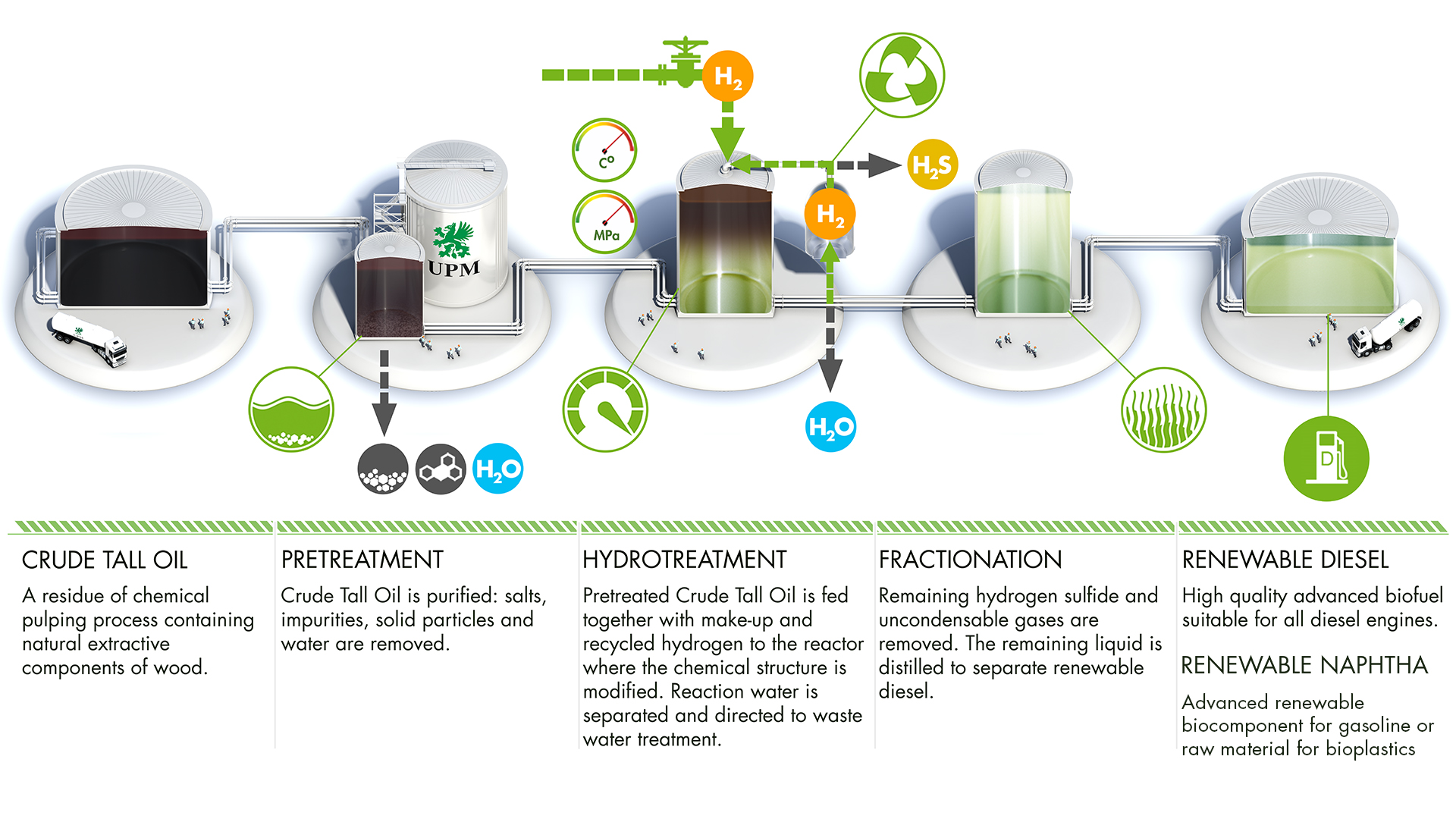 The road with UPM BioVerno has been unique. Tough moments have been overcome, challenges solved and the team’s enthusiasm always maintained. The support from higher in the chain has also been extremely motivating; the feeling has truly been that our work has an impact on the whole company’s level.

The greatest driving force has been that we are now doing something authentically new. And not just in terms of forestry or our own company, but in a global scale – industrial history in the making. It’s hard not to be excited when creating a product that produces 80% less greenhouse gas emissions than fossil fuels do. It really has been inspirational to be a part of making a better and more sustainable tomorrow.